Louisiana has seen its fair share of disaster. The events of hurricane Katrina killed 1,500 people and caused an estimated 125 billion in damages. This catastrophic event was only one of the many problems that the state has seen. Flooding has plagued the region since the day it was settled, and will only get worse with time. Recent research by the USGS has shown that 1,900 square miles of land have been lost on the Louisiana coast in the past 78 years. In other words, an area of land roughly the size of Delaware is now under water. This is due to a series of effects

including tropical storms, rising sea levels, the diversion of the Mississippi River, and the natural removal of sediment by ocean forces. The land which is being lost primarily consists of barrier islands and wetlands, which are some of the most fertile habitats on the planet. This land is vital to plants and animals, and its importance to mankind is even more so. These wetlands act as a buffer and surge barrier. Essentially, they are the best defense that New Orleans has against another devastating hurricane. If this trend is allowed to continue, Tropical Storms will continue to have a more direct route to populated areas. The Corps of Engineers suggests building levees stronger; driving steel deeper and laying concrete thicker, but this is a step in the wrong direction. The process begins with two naturally occurring forces in the ocean, turbidity and upwelling. These forces provide an

ideal situation which can be taken advantage of by placing a specifi c fl oating framework of nets between them. Anchored to the continental shelf, this framework consists of aluminum foam coated in a layer of silicon. The aluminum foam gives the frame buoyancy, while the silicon serves a separate function which is seen at a microscopic level. Silicon is a primary food source of microorganisms called diatoms. Diatoms, or environmental engineers as they are often called, live throughout oceans and marshes and perform many functions. The most important of these is their ability to aggregate soil. Through a chemical process, they bind sand, CO2, and organic matter together to create an aggregated soil. Fed by the silicon and surrounded by the ingredients to aggregate soil, the Diatoms start creating a landmass on the frame that

begins to gain buoyancy through additions of organic matter and CO2. The upper levels of the framework fi ll fi rst and raise subsequent levels to begin accumulating sediment. The fi nal product is a landmass capable of reducing the impact of a storm surge. The benefi ts begin surfacing with the landmass. The space between the coast and the new barrier becomes shielded from open ocean forces and encourages tidal communities to form, which are some of the richest marine habitats. Additional habitat is created on the landmass itself. The massive amount of surface area created below the water allows for a signifi cant rise in aquatic populations; in turn, boosting the suffering Louisiana fi shing industry. 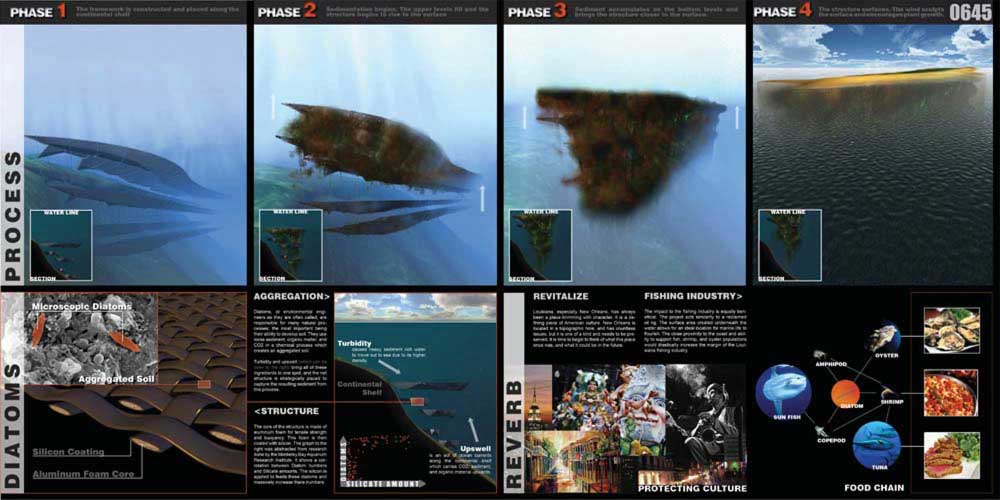