Earthquakes and other natural disasters are inevitable. A deadly natural disaster occurs approximately once a year, killing hundreds of thousands of people, leveling cities, and consuming billions of dollars in resources. In many cases, people die not as a direct result of the disaster, but because they cannot access aid quickly enough. 80% of the world's largest and most deadly earthquakes occur along a 40,000km horseshoe-shaped area in the basin of the Pacifi c Ocean that includes 4 continents. Traditionally, aid comes primarily from the U.S., Denmark, and Australia and deployment may take up to 72 hours. It is within those critical 72 hours that many lives are lost due to injuries and disease. There is also a high potential for infrastructural collapse of the region, leaving an already devastated area to deal with issues of political unrest, leadership, communication, and how to stage disaster relief.

Imagine if disaster relief was immediate; if communications were not lost, if people had access to fully supplied hospitals untouched by the disaster, if countries were empowered to lead their own relief efforts. Imagine Firs+Aid. Firs+Aid stations are distributed throughout the Ring of Fire. The stations offer the safety and stability of a centrally located off-shore location that is readily accessible via boat and helicopter. Firs+Aid stations house a command center, communications facilities, hospital, and provide the needed resources to stage a relief effort. During times of peace Firs+Aid lies prone in the water acting as a battery. A network of electricity generating piezoelectric fi bers and lightweight mats create a fl oating system designed to harvest wave energy. Perpetual kinetic energy is collected and transferred back to the city grid.

In its mobilization phase, Firs+Aid responds to an on-shore disaster. Using infl ation and fl ip technology, the cavernous end of Firs+Aid fi lls with water, displacing air which is channeled at high pressures to infl ate the tower that houses the command center and hospital. Once erected, a lightweight compressive structure locks into place, maintaining the integrity of the tower. The sunken end of the tower provides enormous stability and storage capacity. During this phase the piezo electric fi bers, which are connected to the top structural ring, pull the mats into defense mode. The mats are designed to interlock and provide additional stability by dissipating waves. The piezo electric fi bers intertwined with the building skin continue to harvest kinetic energy while providing tensile strength that work in conjunction with the compressive elements to form the primary structural system. 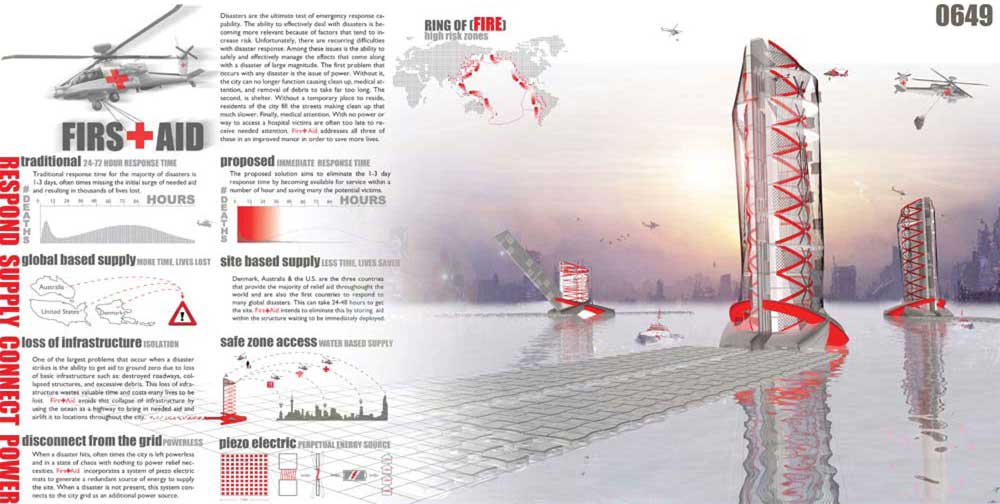 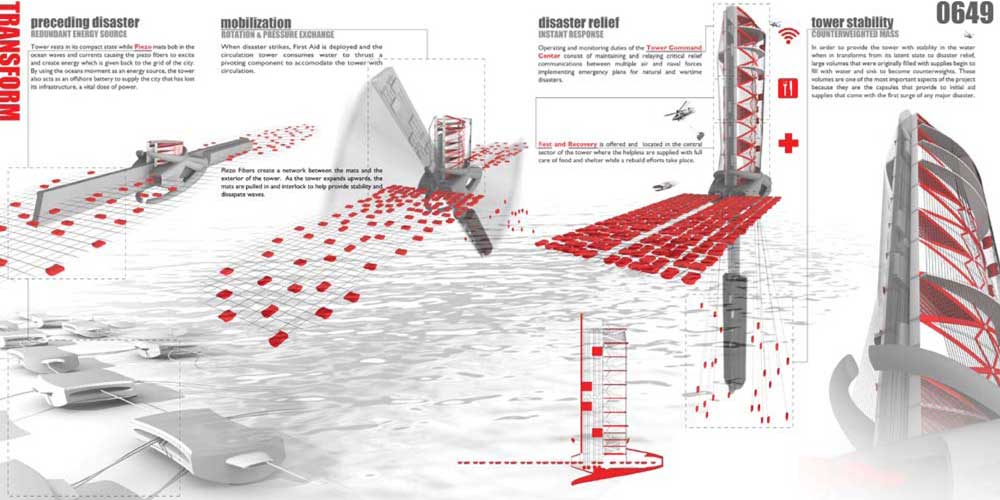