Located northwest of Nicaragua's capital Managua, is the largest open- air landfi ll in Central America, nicknamed La Chureca. After the Vice President of Spain visited La Chureca, 30 million euros were granted in an effort to restore the site. The project includes closing down the existing dump, creating a recycling industry, and providing housing for the scavengers living within La Chureca. However, many of the people working at the dump see it as a threat. Bio_ReGrowth proposes a longterm project that benefi ts both the scavengers and the environment, rather then integrating the scavengers into the city. Bio_ReGrowth

redefi nes the scavengers making them a vital part of society. In order for this to become a reality, a technique called pleaching will allow natural towers to grow within the dump. Bio_ Growth revolutionizes the way our society thinks of skyscrapers in both program and material. The scavengers in La Chureca suffer from terrible health hazards do to the lack of a safe and healthy environment. Each individual picks through the waste, which is then sorted and sold to suppliers of recyclable materials earning them 1.50- 2 US dollars. Scavenged materials include plastic, aluminum, and paper, when recycled in bulk generates marketable garbage. The idea behind Bio_ReGrowth is to use existing materials within La Chureca, as well as the land, to construct vertical farms, which would employ local scavengers. This in return would provide a healthier working

environment for the scavengers, while restoring the surrounding land. Pleaching, a technique similar to grafting, is used to produce the vertical farms' structure. Although pleaching is 2,500 years old, Bio_ReGrowth is taking a modern approach to this historic technique. The project will make its contribution by using it as a building structure, which would allow for pleaching at new heights to resolve environmental and social issues. Bio_ReGrowth uses the existing materials; aluminum, paper, and plastic, to scaffold milled surfaces specifying a trees growth. Pleaching the trees creates a triangulated structural lattice that would inevitably create vertical spaces for program. At the main fl oor, useable waste is organized and recycled. What is left of the waste moves up into the vertical tower to be used as compost for sun farming. Certain plants are grown into the structure allowing

it to mature. The recycled materials, as well as the plants give back to the city, generating an income for the scavengers. Bio_ReGrowth takes what the public defi nes as waste, the city dump and scavengers, and makes them both a vital part of society. Besides saving La Chureca, Bio_ ReGrowth addresses the issues found in the life cycle of today's skyscrapers and additionally brings awareness to a new skyscraper technology called pleaching. Modern day construction goes through many resources just to ship and produce materials. After the building has aged, most of the materials go to a landfi ll. In contrast, Bio_ReGrowth uses existing resources in addition to actually decreasing environmental issues. The outside skin is regulated by orientation and density as it relates to crop types. These variables become key elements in the form of each tower. 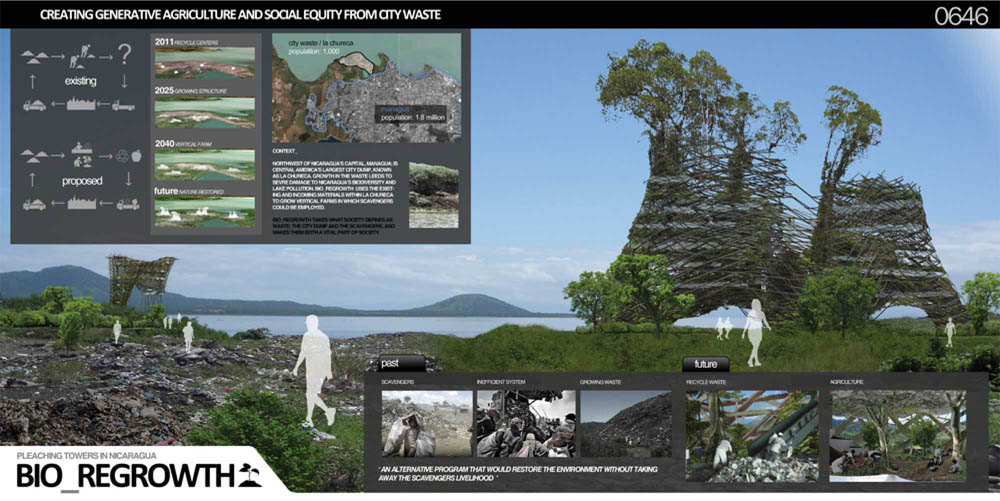