In 1903, the Wright Brothers invented the engine powered airplane called Wright Flyer 1. The invention of the airplane called for a new building type, which emerged as a link between human fl ight and the existing transportation systems. Many cities worldwide have not found an effi cient way to integrate this system within the existing infrastructure. As of now, the current airport typology creates several problems within the urban fabric. A common trend is to build airports in the suburbs due to the large amount of land needed to operate aircraft. This in turn, separates these major hubs from the cities they serve. Flight patterns in and out of these hubs ultimately limit the building heights within the surrounding area. A solution to the current problems created by airports is to integrate the typology

into the city center. SkyPort, a vertical airport design located above the city would reconnect the transportation hub while also minimizing the building footprint. Elevated fl ight patterns would not limit building height due to the verticality of the design. Within SkyPort an opportunity presents itself to bring a rural setting into the dense urban environment of Chicago. This will help improve the congested atmosphere of airports. Cities around the world can adopt SkyPort, a vertical solution to the broken airport typology. O'Hare International Airport in Chicago, Illinois, is fi rst-class example of an expanding airport which could be integrated into the city center. This expanding airport is threatening to relocate residents and businesses nearby due to its sprawl. This creates an opportunity to implement Skyport into the Chicago land area.

Skyport operates based on a helical organization system to achieve maximum effi ciency in air transportation. Runways rotate through the double helix creating a vertical compartmentalization system. A mesh between concrete, steel and carbon fi ber form a protective shell for the aircraft to land. The shortened runway mitigates aircraft momentum through a combination of an inclined rail system which houses a superconducting magnetic system to guide and slow planes for landing. Commercial aircraft landing gear would have to be retrofi tted with a Minimal Magnetic Modifi cation System (M.M.M.S.) which would not inhibit these planes from landing at conventional airports. Airport, a new building type, wants to evolve into organized, effi cient and integrated building typology. 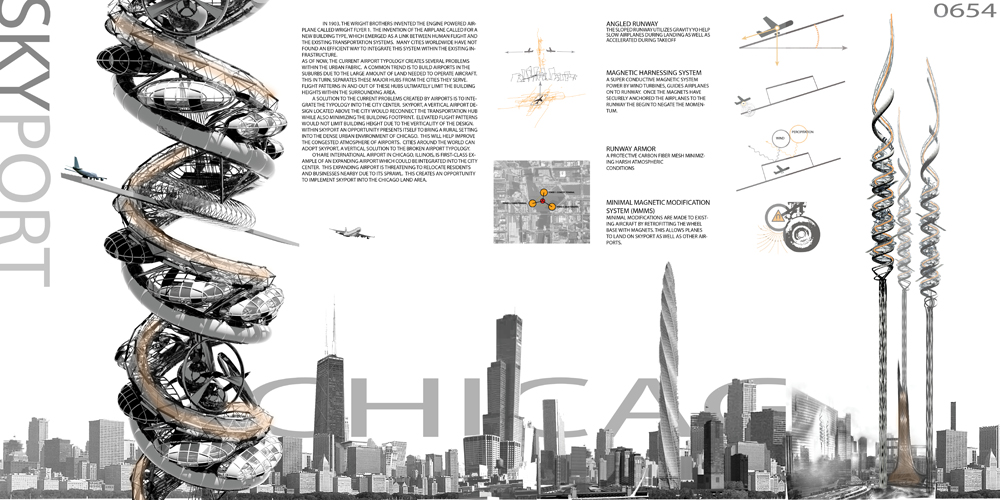 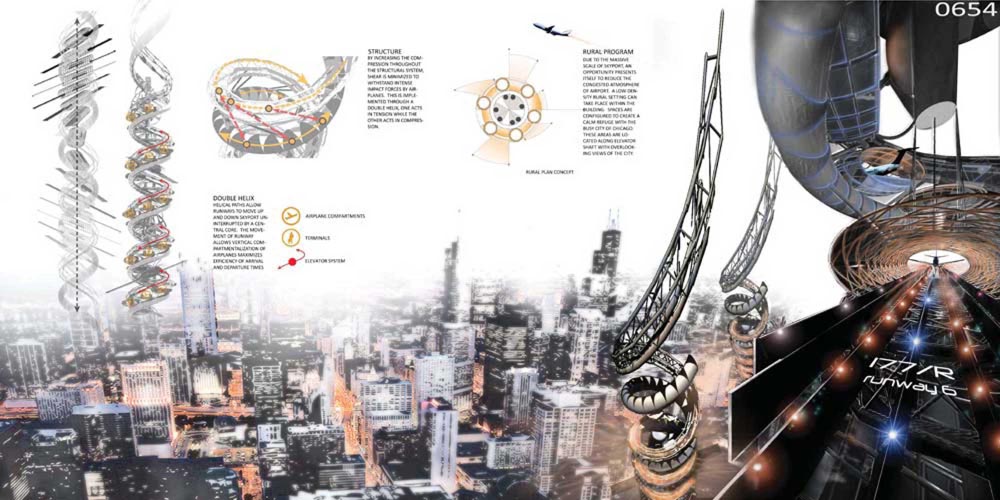